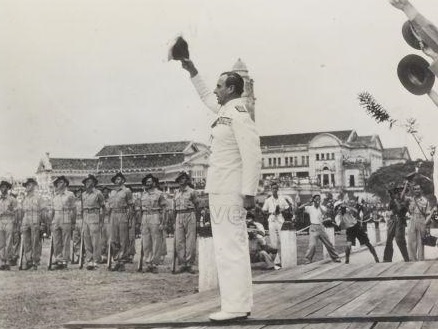 Upon surrender of the Japanese at the end of World War II, the British Military Administration (BMA) was immediately established. This temporary administration was the springboard from which the civil government would take over to restore Singapore’s pre-war prosperity.


The Japanese Occupation of Singapore from 1942 to 1945 caused, amongst other sufferings, severe privation.

Normal functioning of the economy was severely disrupted, including rice and vegetable farming in northern Malaya. Within the first two years of Occupation, prices of foodstuff in Singapore soared to unbearable levels. Consequently, most people had to go without many basic foodstuffs. Racketeering became rampant and there was a universal dependence on the black market .

Upon surrender of the Japanese, the British Military Administration (BMA) was immediately established. This temporary administration which operated for six months, from 5 September 1945 to 31 March 1946, was the springboard from which the civil government would take over to restore Singapore’s pre-war prosperity. The BMA inherited a Singapore which was in social, economic and political disarray. Hunger, malnutrition, absence of education, diseases, unemployment and destitution were rife. Bribery and corruption, profiteering, crimes and robbery were the order of the day.

The BMA proceeded to provide the bare essentials of government: law and order, sanitation and a minimum food supply. It invalidated the worthless Japanese notes which were issued without backing and put into circulation new Malayan currency. Relief measures were initiated and price control measures introduced to bring stability to prices . Unscrupulous sellers who overcharged were punished.

When Singapore’s Civil Government took over from the interim BMA, it launched public restaurants, popularly known as People’s Restaurants or People’s Canteens, where meals were sold cheaply. These feeding schemes started in June 1946 and continued till 1948.